As the logistical lifeline of Eden’s economy for almost two centuries, the port of Eden celebrated a new major event in November 2005, when the town’s first visiting cruise ship, the Pacific Princess, eased into port. Crowds congregated on the nearby headland to welcome to 30,000 tonne ship into Twofold Bay, a spectacular sight for Eden locals. A group of humpback whales even turned up for the show, adding to the fanfare with a magnificent breaching display as the ship steamed through the bay.

The P&O cruise ship carried 700 passengers, many of whom came ashore to explore the area, venturing as far as Merimbula and Bega. The visit marked the passengers’ final stop on an anti-clockwise circumnavigation of Australia, departing from Sydney.

In addition to the many attractions of the area, Eden is the only deep water harbour between Sydney and Melbourne, making it an ideal stopover destination for cruise ships. After centuries of whaling, fishing and timber industries driving the economy of Eden, the possibilities posed by the cruise ship industry excited many in the shire.

In August 2017, construction began for a new Eden Cruise Wharf, which would allow cruise ships to berth at Snug Cove, rather than anchoring in Twofold Bay and tendering passengers to shore. The project was completed over the course of two years, and required the dredging of approximately 231,500m3 of in situ material from the bed of Snug Cove and Twofold Bay. The existing wharf was extended by 95m, and new mooring, berthing and navigation facilities were installed. In September 2019, the 2000-plus passenger Pacific Explorer became the first cruise ship to berth at the new Eden Breakwater Wharf.

To cater for the growth of cruise in Eden, the Port Authority of NSW constructed a new purpose-built facility at Snug Cove to welcome cruise passengers. Located on the old fishermen’s co-op site, the Eden Welcome Centre officially opened in May 2021. Built by local Rankin Builders, the facility took more than 10,000 working hours to complete.

The structure and cladding of the building has been made from recycled timbers, sourced from various locations in region New South Wales and Victoria, and native hardwoods from the region. Recycled materials have also been incorporated wherever possible. Of note, are the copper nails that have been salvaged from the 1959 Sydney to Hobart Yacht Race Contender, Jindivik, that were used to nail the copper end caps on to the roof rafters. The Jindivik was one of six yachts who retired from the 1959 race and was moored in Eden until a storm washed the vessel onto the rocks and into nearby bushland.

Eden continues to grow as a popular tourism destination, and cruise passengers have supplied a major boost to local businesses. Twenty-two ships were set to visit over the 2019-20 cruise season, however bushfires and COVID-19 played havoc on the cruise industry. No doubt the return of cruise ships to the Port of Eden will be instrumental in aiding the economic recovery of the region, proving once again the importance of the port and maritime heritage of the town of Eden. 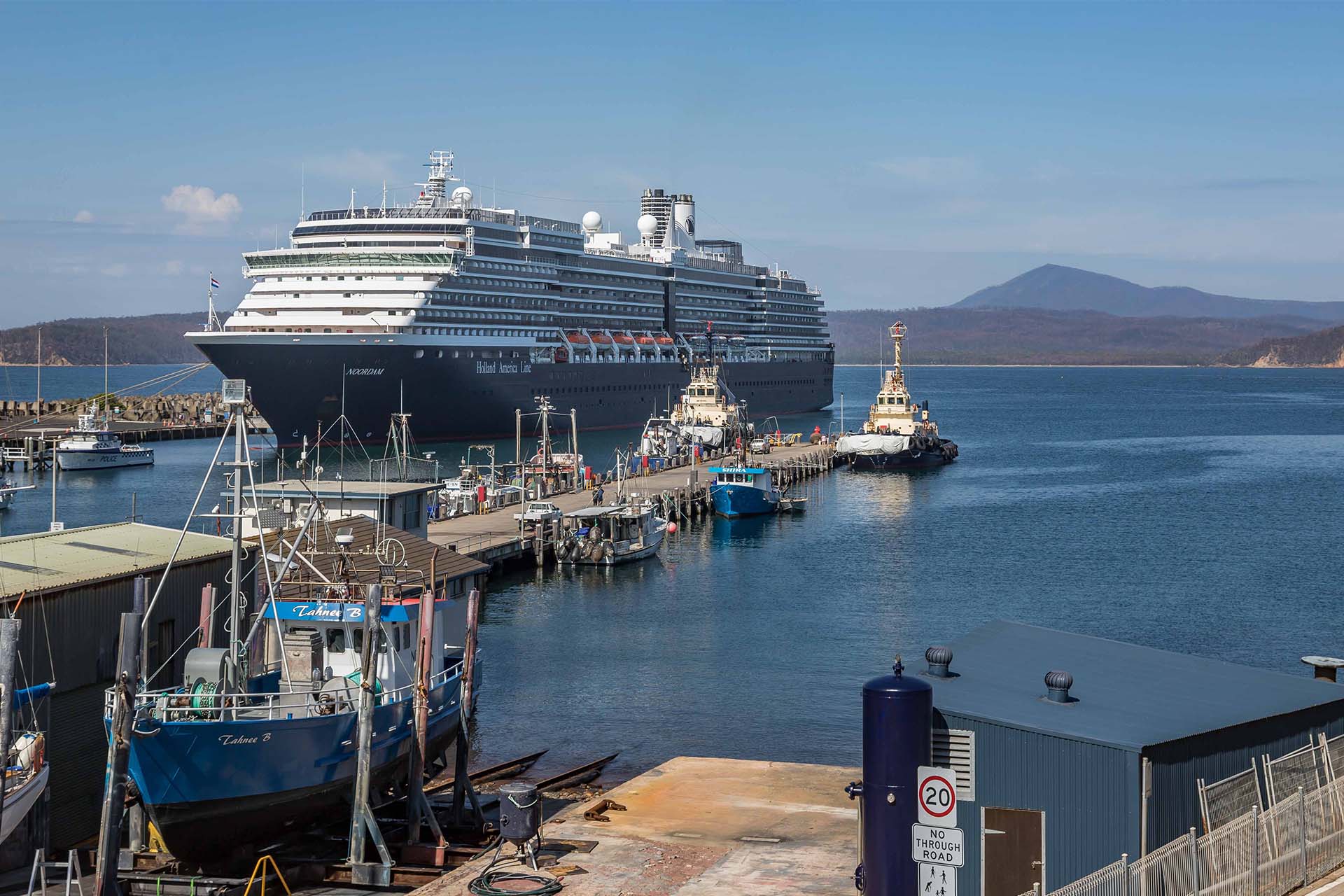 Pictured above: Cruise ship at the Port of Eden, 2020. Photo by David Rogers.