The Eden region is a highly significant geoheritage site because of its Devonian-era flora and fauna fossils. The fossils encompass the appearance of the first forests and the first land animals. The Eden coastline is also a world-class fossil fish site — a new species of fossil fish from Eden has been named Edenopteron keithcrooki, is the largest Devonian lobe-fin know from semi-articulated remains.. 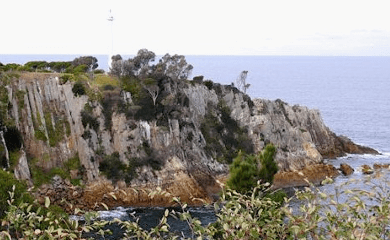 Eden Lookout on Middle Head
Devonian period: about 380 million years ago
The headland — Middle Head — gives Twofold Bay its name, jutting out into the bay and separating it into its two “folds”. Middle Head is made up of erosion-resistant volcanic rock.  The cliff is a cross-section through two 380-million-year-old ignimbrite flows, tilted towards the ocean. Ignimbrites are made of a mixture of superhot clouds of gas-charged ash and pumice fragments. The almost vertical structures in the cliff are fractures separating hexagonal columns formed as debris, which shrank during the cooling of lava flows that poured over the ancient land surface about 360 million years ago. 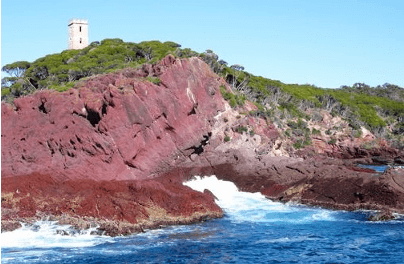 Boyd’s Tower at Red Point on the southern headland
Devonian period: about 380–360 million years ago
Boyd’s Tower sits atop the long, sloping southern headland of Twofold Bay. This headland and Middle Head are formed of ancient river sediment — pink sandstone and red mudstone — deposited during the Devonian period about 380–360 million years ago. Around Red Point are some of the oldest rocks on the NSW coast. More than 80 per cent of the Upper Devonian rocks exposed along the coast of south-eastern Australia is found in Ben Boyd National Park. 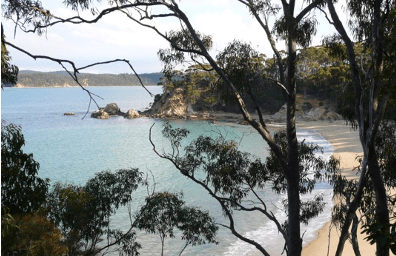 Cliffs along Cocora Beach to Quarantine Bay
Ordovician period: about 440 million years ago
The cliffs between Boydtown and Cocora Beach, south of Eden, are composed of sandstone and mudstone deposited in a deep ocean during Ordovician times. Over 80 million years, these sediments were folded, faulted, crunched and cooked to form solid rocks, with slight disturbances to the layers as they were lifted and resettled by currents. In the cliffs at Quarantine Bay, the original flat layers are standing nearly vertically. 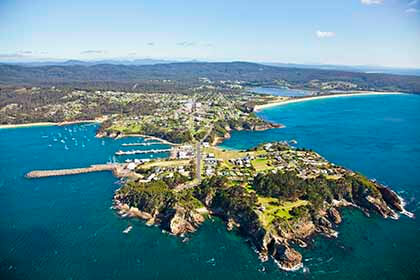 Twofold Bay — is one of the deepest natural harbours in the Southern Hemisphere
The huge arc of Twofold Bay’s southern and western bights is a sea-carved landscape formed in soft sandstone and mudstone since the sea rose to its present level 6000 years ago. During the last ice age, which ended about 20,000 years ago, a great river flowed through a rocky gorge across what is now Twofold Bay. 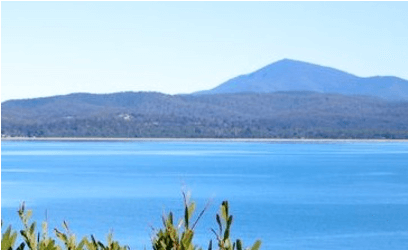 Eden Lookout — view to Balawan (Mount Imlay)
Devonian and Ordovician periods
To the south-west is Balawan (Mount Imlay), one of the region’s three mountains significant to the Yuin people. Mount Imlay (886m) has a conical shape. It is not of volcanic origin, rather it is an erosional form capped by resistant sandstone. The summit of Mount Imlay and the surrounding upper slopes consist of Devonian (395–345 million years ago) rocks of the Merimbula group — including sandstone, conglomerates, quartzite, siltstone and shale — lying above the Ordovician sediments. 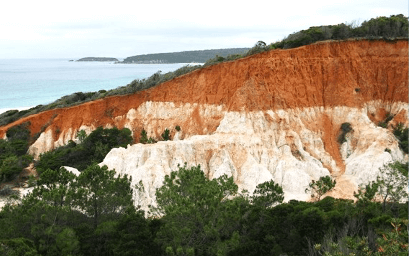 The Pinnacles — the Paleogene sandstones
Paleogene period: about 30–23 million years ago
Soft sandstone and gravel stone, deposited in streams in the Long Beach formation about 25 million years ago, have eroded away to form gullies. Rainforest grew on the inland mountains and rushing streams carried huge loads of sediment out onto extensive plains. The red colour is iron oxide (rust), produced by rock weathering over time in a climate alternating between warm, humid conditions and periods of dryness. The white sediment at the top marks the level of an ancient watertable. 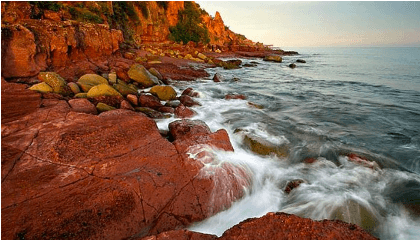 Merimbula Wharf and the red beds
Devonian period: about 380–360 million years ago
The first forests caused a leap in oxygen levels, rust-coloured iron oxide staining the sediments. Roots of plants that grew on river floodplains can be seen in the red mudstones on the rock platform at Merimbula Wharf. Increased oxygen enabled the development of huge armoured fish and the evolution of amphibians — the first land animals — fossil tracks of which occur in the region. 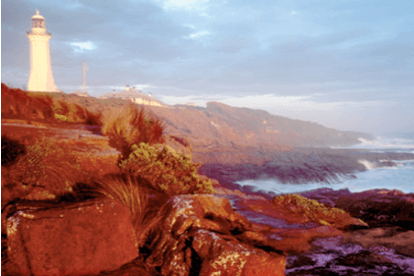 Green Cape panorama
This is a superb coastal wilderness vantage point: the 370-million-year-old rust-red rocks of the wave platforms, the three sacred mountains to the north, and the huge ice age-period Cape Howe dune systems on the far horizon to the south. Because it is where the warm East Australian and cold, nutrient-rich Southern Ocean currents converge, it is an ideal place for viewing whales and seals.