When it comes to the vagaries of the ocean, the people of Eden have long been regarded by seafarers as a steady and welcoming hand, and this was perhaps no more clearly demonstrated than the response of townsfolk in the wake of the disastrous 1998 Sydney to Hobart Yacht Race.

Widely regarded as one of the toughest yacht races in the world, the event covers approximately 630 nautical miles (1,170 km) and is hosted by the Sydney-based Cruising Yacht Club of Australia.

Starting on Boxing Day, 26 December 1998, the fleet of 115 vessels departed Sydney Harbour in favourable conditions, ready to head down the south east coast, through the Tasman Sea and Bass Strait to Constitution Dock at Hobart. Vessels taking part in that 54th running of the blue water classic ranged in size from the smallest, 10.0 metre (33 foot) Berrimilla through to Sayonara, at 24.1 metre (79 foot), the largest. Run every year since 1945, competitors in the annual event face some of the toughest ocean and weather conditions, but what lay ahead would prove to be the most disastrous in the race’s history.

On the second day the weather conditions continued to deteriorate into a storm of catastrophic proportions with gusts of wind recorded at a terrifying 90 knots (166 km per hour) around Wilsons Promontory and crews battling waves estimated at up to 30 metres in height. Although under the race rules, competitors were not allowed to provide information to other boats regarding the weather conditions ahead, the crew on board the Sword of Orion fortuitously chose to break with regulation, warning of the wind strengths and although it was too late to reach everyone, around 40 boats were able to retire to Eden as a result of their broadcast.

The local community rallied immediately – from members of the Eden Coastal Patrol, trawler skippers and crew members, light plane pilots, crane operators, the town’s business houses – all who could help did so. Because the disaster happened during the peak of the district’s busy Christmas tourist season, motel and van park accommodation was almost impossible to come by, but the Eden community responded by opening their homes to the hundreds of stranded sailors.

On the evening of 27 December, the crew of the Eden trawler Josephine Jean responded to a call to assist the Milintinta and after spending more than eight hours searching for the stricken yacht, the six crew members were eventually taken on board the trawler. The sailors were finally delivered safely to the Eden wharf after a 19-hour ordeal at the mercy of the wind and waves. In 2007 the efforts of the Josephine Jean’s crew that night were recognised when Martin Bowden, Jason Cole and Thorvaldur (Ollie) Hreinsson were awarded an Australian group bravery citation.

Medals and certificates were also presented by NSW Governor Marie Bashir to Senior Constable Brad Ross of the Eden Police, Senior Constable Francis O’Brien of the Merimbula Police and Anthony Hardy and Terry Gates, both of the Eden Ambulance Service, for their roles in rescuing an injured crewman from the yacht Renegade.

In all, fifty-five sailors were rescued by military and civilian aircraft, boats and ships in what became the largest peacetime search and rescue operation ever instigated in Australia. In this, the deadliest incident in Australian sailing history, six lives were lost, and of the 115 yachts that started, five sunk, seven were abandoned and 71 retired. Only 44 completed the event. 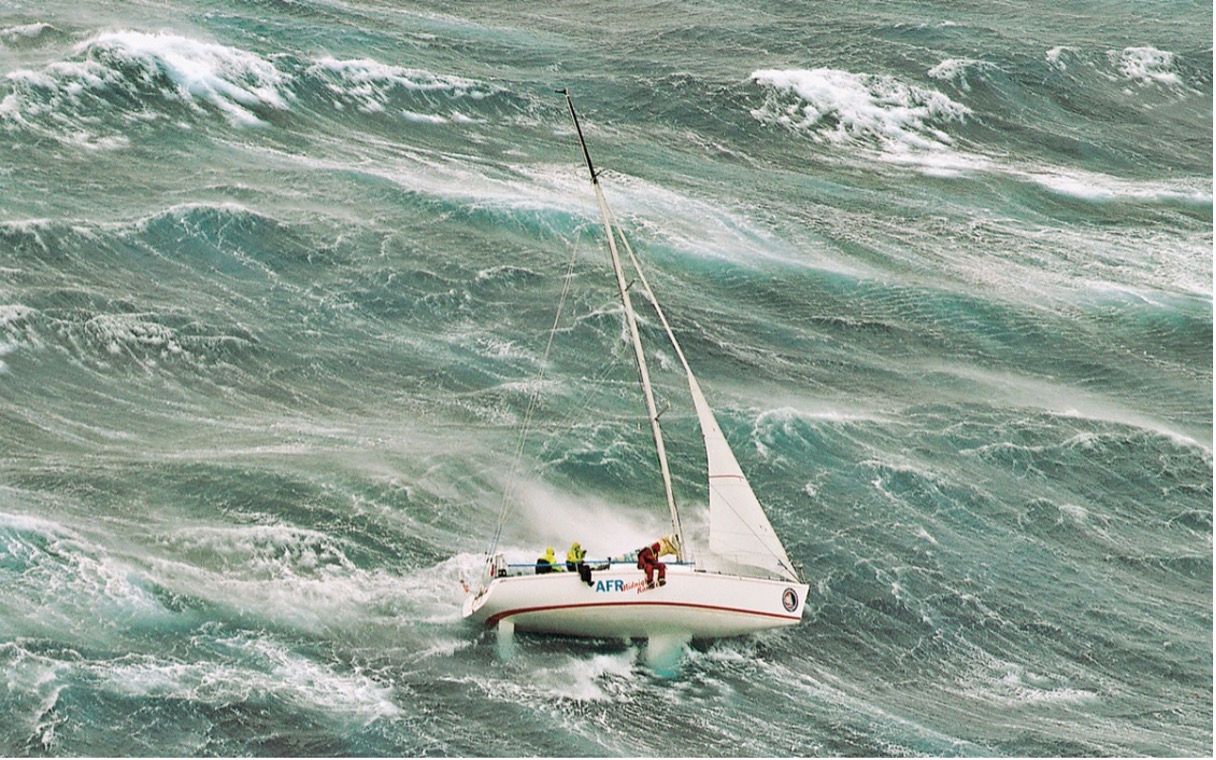 Above: The crew of AFR Midnight Rambler battling through atrocious conditions during the 1998 Sydney to Hobart. Image © Richard Bennett Photography. All rights reserved. This photograph is in copyright. All rights remain with the photographer. 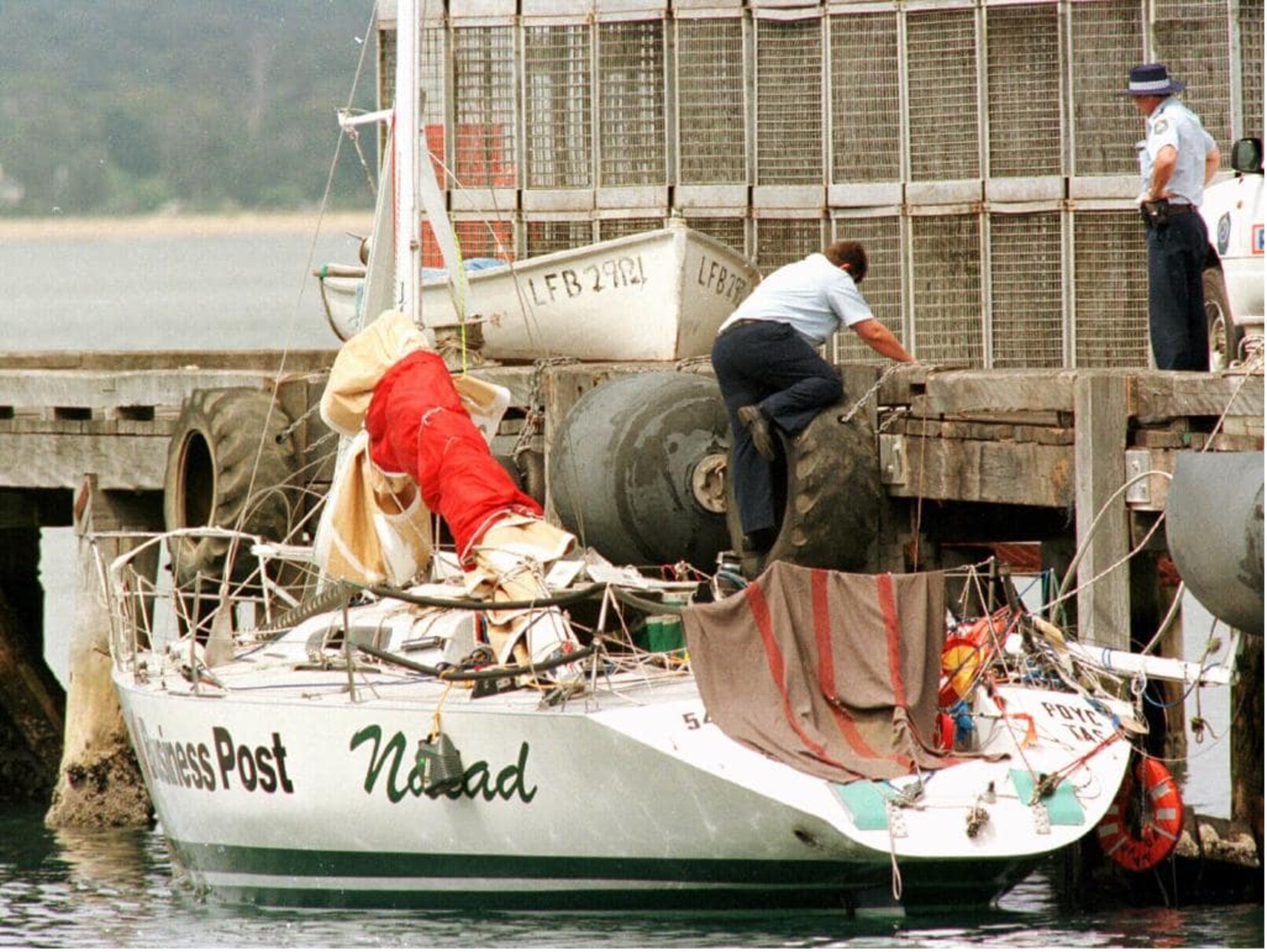 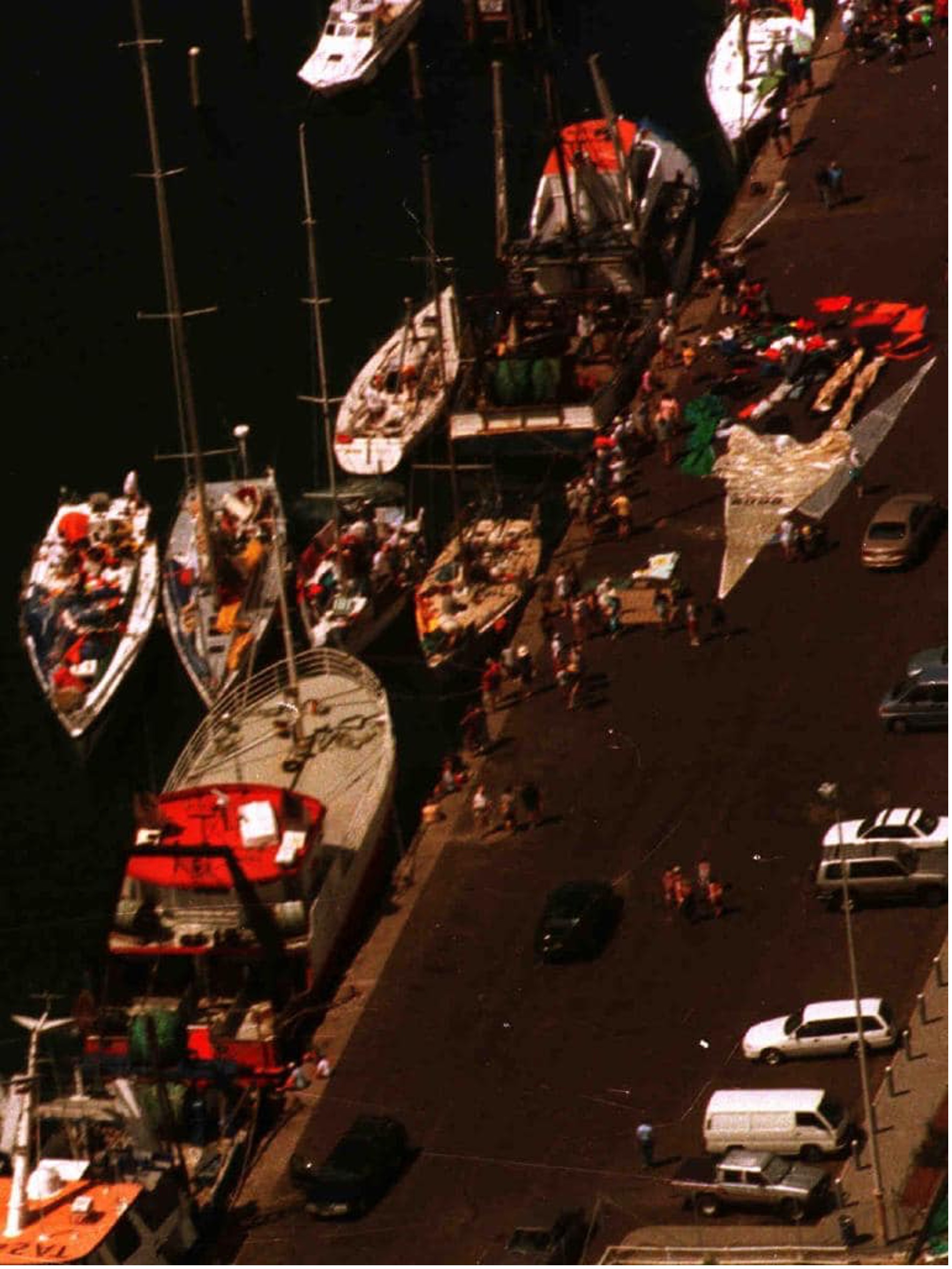 Above left: Police inspecting Business Post Naiad after it was towed into Eden during the 1998 Sydney to Hobart. Image © Nick Cubbin, via News Corp Australia. All rights reserved. This photograph is in copyright. All rights remain with the photographer.

Above right: Yachts lined up along Eden wharf during the 1998 Sydney to Hobart. Image © Jay Town, via News Corp Australia. All rights reserved. This photograph is in copyright. All rights remain with the photographer.