Activity at Eden continued at its usual slow, measured pace until the discovery of payable gold at Kiandra, high in the aptly named Snowy Mountains region of New South Wales.

Brothers James and David Pollock made the initial discovery in mid-1859, prospecting in Bullock Head Creek while grazing sheep from the Murray. Although the pair reported the find at Tumberumba before returning overland with their stock, it was not until Gillon, Hayes and Grice made a similar discovery in Pollock’s Gully in November the same year that the potential wealth of the area came under public attention.

The focus of one of the colony’s shortest but most frenetic gold rushes, within a month, hopeful diggers in their thousands were wending their way to Kiandra, fifty miles south-west of Cooma, seeking their own El Dorado. Despite warnings of the harsh climate, bleakly illustrated by tales of bullock skeletons hanging from trees, Gold Commissioner Cloete advised the Secretary for Lands in January 1860 that three to four thousand miners were already at work on the new field and public opinion, buoyed by growing optimism of the extent of the discovery, only encouraged the influx. A gentleman from Eden wrote in February that “All who are not mad have left this place for the diggings…” while in nearby Pambula, similar sentiments were echoed “…with the reservation that those who are left are not positively mad…”

From the very earliest days of the rush, confidence in the field’s prospects were championed through the print media, and although a few advised caution, hopeful miners nonetheless threw caution to the wind and flocked there in ever greater numbers. A report in March claimed that “These are the best diggings ever opened in the country, from the quantity of gold and the ease with which it is obtained. Anyone can get gold if he has tools, clothing and provisions and the will to try; and if without tools or money, he can get £1 a day and his dinner by working for other people…” Commissioner Cloete echoed this opinion, commenting that “This is a most extensive, and will, I think, be the richest gold-field ever discovered in Australia…”

Not surprisingly given its location on the coast and proximity to the field, shipping activity at Twofold Bay took off at a feverish pace. In March 1860, it was reported that the Wonga, Tasmania and Mimosa were all preparing to depart Sydney for the port, while ten thousand men were claimed to be on their way from Victoria, most reportedly likely to land at Twofold Bay, “…which port seems likely to jump ahead at last in consequence of…” the Kiandra gold discoveries.

By mid-1860, it was stated that “By a very modest calculation, we may anticipate that 50,000 persons will pass through Eden to the new gold-field before December next…” and in September it was claimed that “If Kiandra continues to be as attractive as it has hitherto proved, we shall have Eden…a bustling sea-port, the centre of a great traffic to the gold regions of the alps…”

The increased activity had an almost immediate impact on Eden. The number of hotels in the township exploded from three in May 1859 to 11 by September 1860 and businessmen, anxious to take advantage of the new opportunities, began arriving from Melbourne, Hobart and Adelaide. Although land in the town was “…selling at almost fabulous prices…”, buildings nonetheless sprang up virtually overnight to accommodate the growing number of stores stocking all manner of goods required by prospectors and others.

Unfortunately though, despite the potentially rich pickings on the field, the early optimism proved ill placed. Situated so high in the bitter Alpine region of the Snowy Mountains, the icy bleakness of winter soon made itself felt and by early 1861, local business activity was already being described as “…unsettled…”, it being reported that “Eden is fast being denuded of the individuals who had settled down there in anticipation of the Kiandra, long ere this, becoming an extensive and payable goldfield.” Combined with the inadequate shelter and poor provisions on the field, diggers began retracing their route back down the mountain to Twofold Bay, ready to seize the first available shipping berth to move on to the next sure thing.

1860 – Construction of the first Eden Wharf

As European settlement established itself at Twofold Bay, shipping facilities for the loading and unloaded of cargo became increasingly important, particularly as it was also the natural outlet for the adjacent Monaro region. The harbour was surveyed in 1834 and by 1843 small jetties had been erected to service a growing trade.

However, with the rapid increase in both passengers and cargo in the wake of the Kiandra gold rush of 1859/60, public attention was soon focused on the inadequacy of the local facilities. It quickly became apparent that the existing wharfage was unable to handle the loading and discharging requirements of the growing number of vessels using the port. It was one of the central issues raised at a public meeting in May 1860, called to consider the measures necessary to meet the anticipated growth in traffic likely to occur as a result of the goldfield.

Lobbying began, continuing until the demand for improvements was successful with the arrival, in June 1860, of surveyor Mr. McKinchie to commence planning for the new facilities. Tenders for the jetty were called in July and the contract for the 300-foot-long by 20-foot-wide structure was awarded to Messrs. Blair and Campbell. Local maritime activity continued to expand and extensions to the wharf were made in 1884, the 1890s and again in 1911 and in 1896 a crane was added to the infrastructure to aid cargo handling.

Although coastal shipping activity generally declined after World War II, Eden’s harbour and wharf remained important for the transportation of timber and accommodation of fuel tankers as well as the growing local commercial fishing fleet. Recreational cruising, tourism charters and whale watching only added to this.

By the 1950s, a second wharf had been built, the breakwater wharf was commenced in 1976 and in 1981 the mooring jetty was built. However, the original 1860 jetty could no longer meet the growing needs of the port and in 1980, work commenced on a new $1.5 million multi-purpose wharf measuring 194 metres in length and 10 metres in width. It was officially opened in 1984, replacing the old structure that had served the community for more than a century.

Located as it is on Australia’s east coast close to where southbound shipping enters Bass Strait, Twofold Bay has long played a vital role in the maritime transport industry of the continent. Thus, it was no surprise that, in the wake of the growing traffic associated with the Kiandra gold rush, the establishment of a navigation light grew in importance.

Built of timber, Eden’s first lighthouse, pilot station and harbour master’s quarters was erected on Lookout Point in 1860, but it wasn’t until 1862 that the lamp itself was installed in the six-sided tower. When it was though, it was a proud mark of progress in the colony – the reflecting lamp and metal framework were the first of their kind to be wholly made and set up in NSW. The light, visible for seven miles out to sea, was first exhibited on 24 May 1862.

The original lighthouse continued to serve its purpose until about 1919, when it was replaced with a steel lattice type tower reportedly recycled from Newcastle and erected some fifty feet to the southward of the original. This lasted with various beacons until it was replaced by the present structure in 1990. It is now owned and maintained by the Port Authority of NSW.

The original 1860 building, which included the harbour master’s residence, was demolished during the 1960s. Eden’s Marine Rescue NSW now stands on the site. 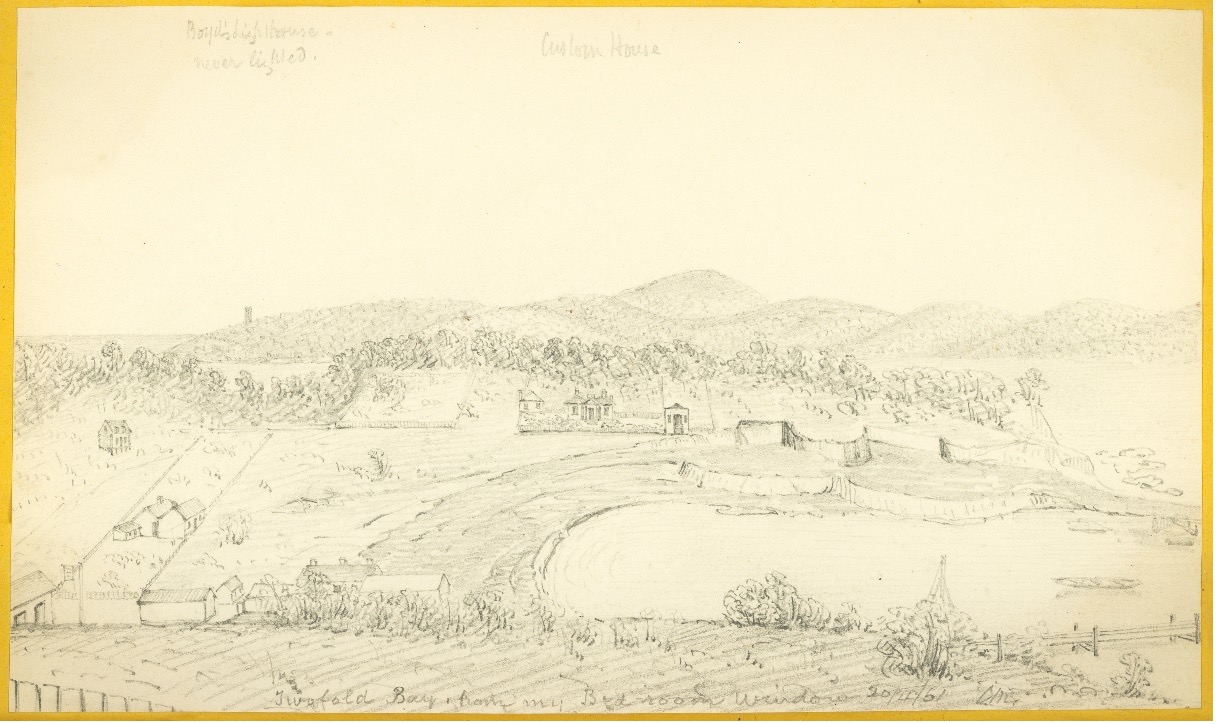 Above: ‘Twofold Bay from my Bedroom Window’, pencil drawing by Charles Maplestone, 1861. From the collection of the State Library of Victoria. 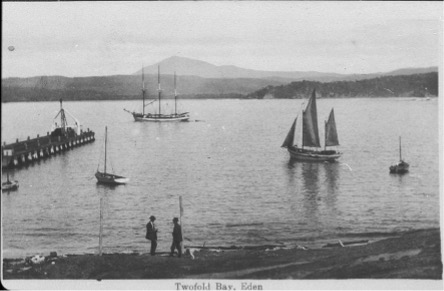 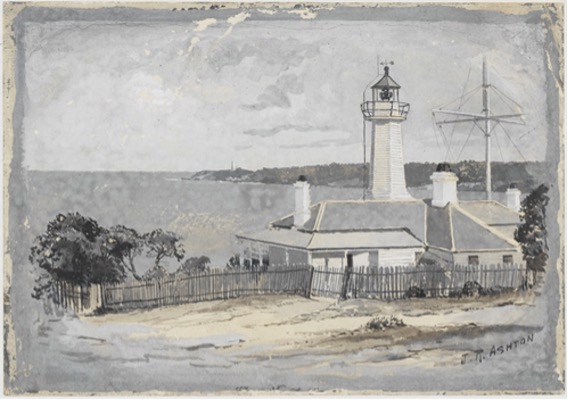 Above left: Twofold Bay, Eden, NSW. From the collection of the State Library of NSW.

Above right: Lighthouse, Eden Lookout, Twofold Bay, by Julian Rossi Ashton, C. 1890. From the collection of the State Library of NSW.