1797 – The epic overland trek by sailors from the Sydney Cove

Although British settlement had been established in colonial New South Wales in 1788, it was almost a decade before the first recorded contact between the Aboriginal people of Twofold Bay and Europeans took place – and this occurred not as a result of careful planning but due to a series of misadventures during a voyage from Calcutta in India to Sydney.

It all began in November 1796 when the Sydney Cove set sail from Calcutta, loaded with cargo from India, China and Europe. After encountering heavy seas in December, the vessel began to leak so heavily that the ship was in imminent danger of sinking. The captain was forced to run the ship ashore on Preservation Island off the coast of Tasmania, some 1,000 kilometres from their intended destination.

Seventeen men were sent by boat to seek help in Port Jackson, a dangerous 800-mile journey away along the New South Wales east coast. However, after encountering yet more wild seas and winds crossing the Bass Strait, the party were so battered that they cast their vessel ashore upon meeting Ninety Mile Beach on what is now the Victorian Coastline. The sailors found themselves stranded in unfamiliar territory with little choice but to attempt a journey of over 600 unchartered kilometres overland to Port Jackson, Sydney.

What followed was a desperate three month struggle for survival, trekking through thick coastal bushland, fording and rafting rivers and streams and foraging unfamiliar foods. The journey was chronicled by William Clarke, who kept a diary. On 29 March 1797, the party crossed a deep narrow river, believed to have been the Wonboyn; and on 31 March reached Twofold Bay. Thus, the first recorded European visitation to the Twofold Bay area occurred.

Enduring incredible hardships in their struggle up the coast, the men gladly accepted assistance from Aboriginal people along the way, with offerings of food such as shellfish, mussels and fish, and help with river crossings. Even with this help, only three of the original group survived the journey to Port Jackson. The trio had walked further on Australian soil than any non-Indigenous person had before them.

In December 1797, surgeon explorer George Bass was granted permission by Governor Hunter to make a voyage from Sydney along the east coast, armed with the information from the survivors of the ill-fated Sydney Cove. The expedition lasted eleven weeks, during which he explored more than 1,900 kilometres of coastline. On 19 December 1797 he reached Twofold Bay, the name he gave it on account of the two bays that made up the harbour. He noted the harbour’s advantages for shipping, and upon visiting again on his return voyage he recorded that “…at noon reached Twofold Bay and having ascertained that Snug Cove on its north east side afforded shelter for shipping, steered northward.”

Some months after his return, George Bass partnered with Matthew Flinders to retrace his route down the east coast. Setting out on the 25-ton colonial sloop Norfolk, the pair were joined by a crew of eight with the intention of discovering if a passage existed between Van Diemen’s Land (Tasmania) and the mainland.

The Norfolk reached Twofold Bay on 9 October 1798, and Bass spent considerable time on natural history pursuits, taking a boat up the rivers and making many inland excursions, making notes about the Eucalypt, redbill, oyster catcher, plover, black swan, albatross and wombat. Meanwhile, Flinders made a survey of the harbour, during which he met with an Aboriginal man, with whom he exchanged a biscuit for a piece of whale fat.

“[He] was of middle age, unarmed, except with a whaddie or wooden scimitar, and he came up to us seemingly with careless confidence. We made much of him and gave him some biscuit; and he in return presented us with a piece of gristly fat, probably of whale. This I tasted; but, watching an opportunity to spit it out when he should not be looking, I perceived him doing precisely the same thing with our biscuit, whose taste was probably no more agreeable to him, than his whale was to me.”

The party undertook a careful survey of the harbour before departing on the morning of 14 October, and went on to successfully prove the existence of the Bass Strait by circumnavigating Tasmania. 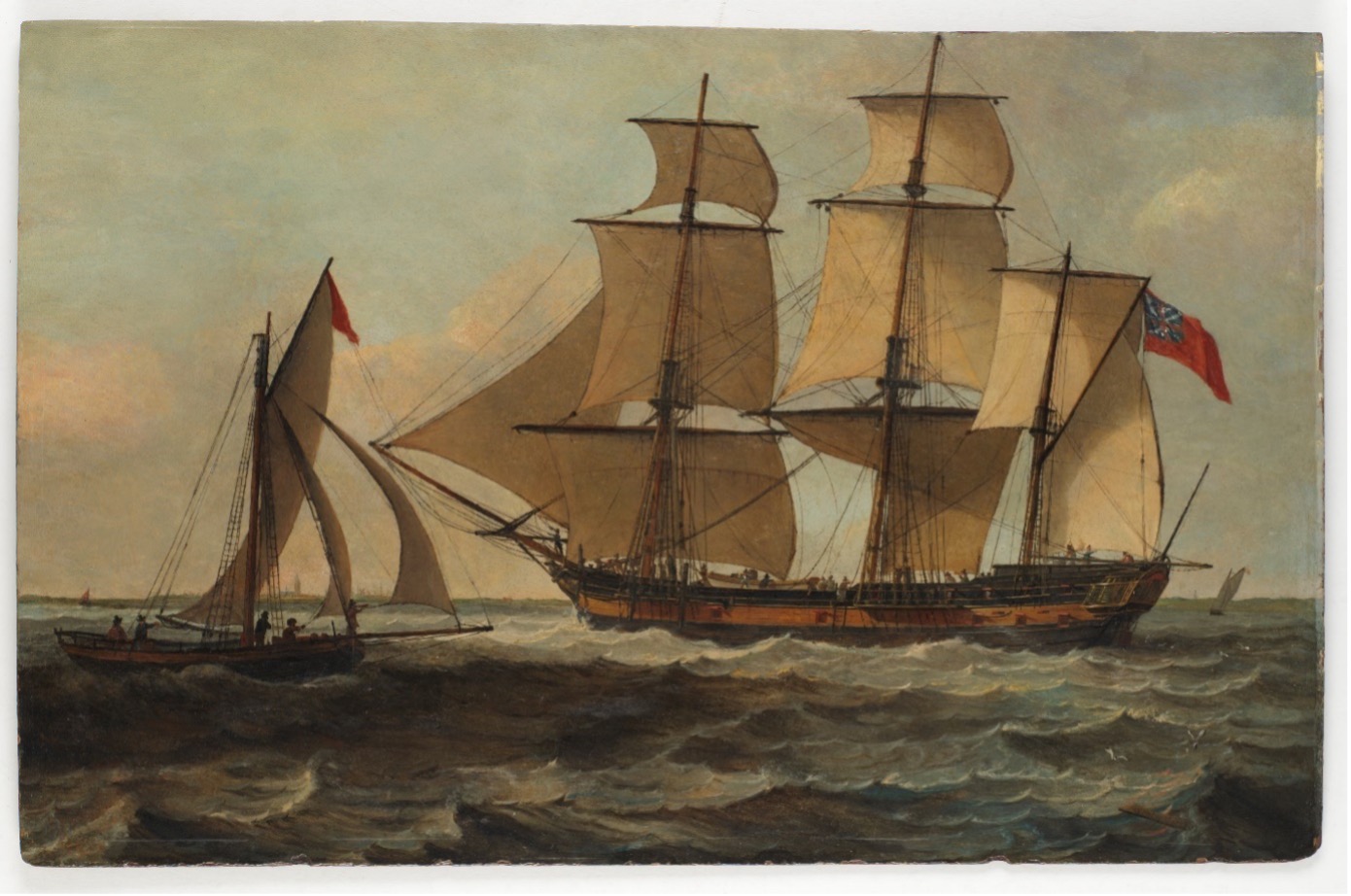 Above: Sailing ship Il Netunno, later named Marquis Cornwallis, oil painting by F. B. Solvyns, 1791. Although there are no known illustrations of the Sydney Cove, it resembled this vessel. Image from the collection of the Mitchell Library, State Library of NSW. 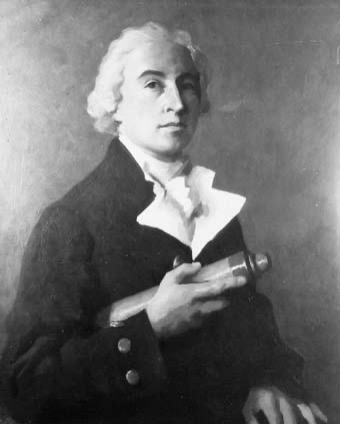 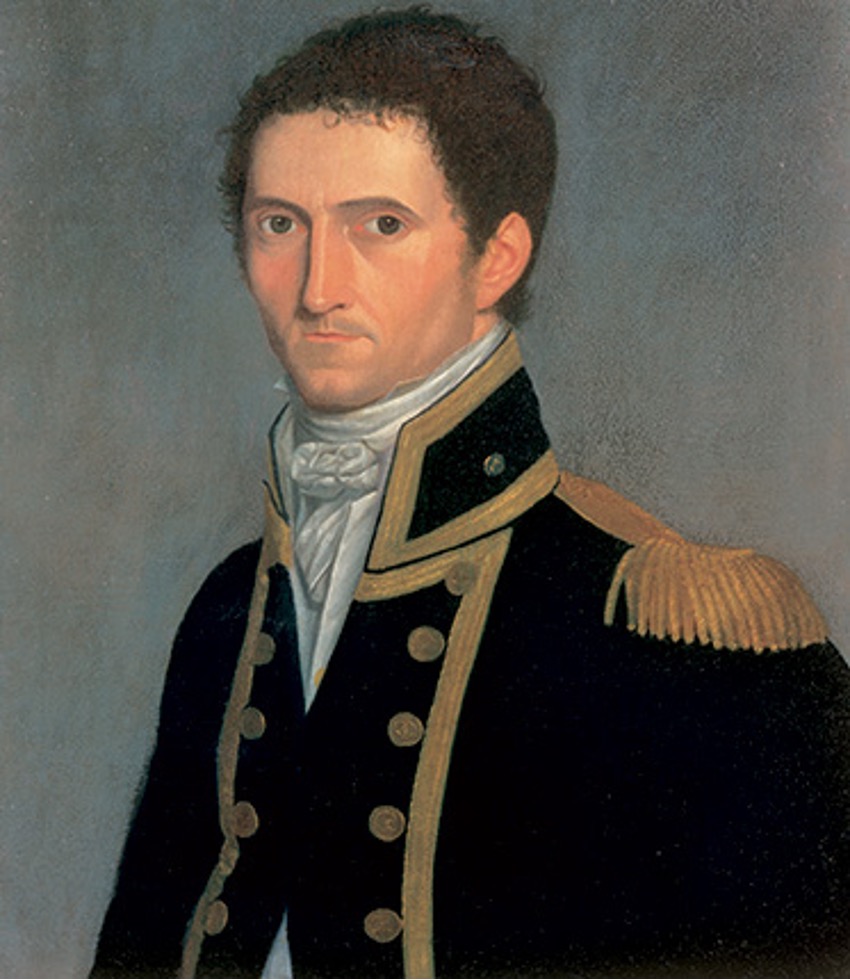 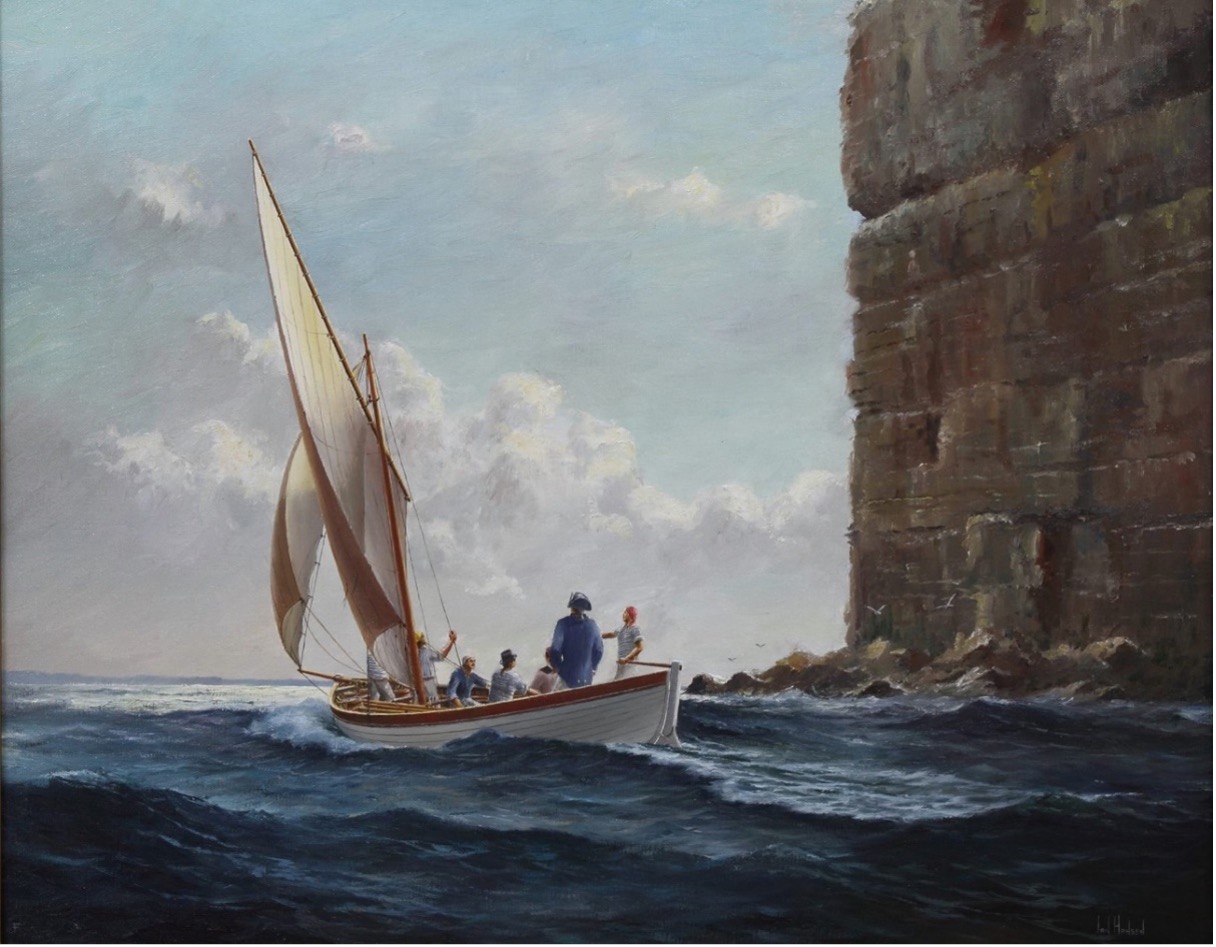 Above left: George Bass (1771-1803), by unknown artist. From the collection of the National Archives of Australia.

Above centre: Portrait of Matthew Flinders, RN, 1774–1814, oil on canvas by Toussaint Antoine De Chazal De Chamerel, 1806 – 1807. From the collection of the Art Gallery of South Australia.

Above right: Surgeon George Bass, entering Jervis Bay at 3pm in the afternoon on 10th December 1797, painting by Ian Hansen. From the collection of the Jervis Bay Maritime Museum. This image is in copyright. All rights remain with the artist and is included on this page of information purposes only.