From the time the world’s first railway was constructed in the United Kingdom in 1825, hand hewn wooden sleepers became a major part of the global transport industry. Just thirty years later, the New South Wales Railways’ first service, the 22.5-kilometre Sydney to Parramatta Junction line commenced, inaugurating a century of sleeper cutting in the colony’s forests. As the rail networks continued to expand, so too did the demand for the hard wood sleepers upon which the lines rested. And with every kilometre of railway requiring, on average, about 1,900 sleepers, there is little wonder that for many years, Australia’s largest group of forestry workers were the sleeper cutters.

The widespread stands of straight, tall, trees throughout the local forests saw sleeper cutters and their agents gradually moving down the coast and up from East Gippsland, following the hardwood needed for the burgeoning railway networks not only within Australia but also in New Zealand, India, Pakistan, China, South Africa and Europe. Sleeper cutting commenced on a small scale locally by the late 1890s and in 1904, Mr. A. Becus began arranging for cutters to commence work in the local forests.

By 1907, fifty cutters were working around the Eden district alone, producing sleepers from Woollybutt, Blackbutt, Grey Box and other species and in 1911, more than 94,000 sleepers were cut, dressed and shipped from various points around Twofold Bay. In 1915, the John Craig, at that point the largest ship that called at Eden for sleepers, loaded about 16,000 and by 1920, timber cutting for saw logs and sleepers was one of the district’s primary land uses

Sleeper cutting was a hard, dangerous, low paid industry, and access to timber supplies had a significant impact on the lifestyle of the timber workers and their families. Because of the nature of the occupation, cutters usually lived in bark huts or tents in the bush, often sharing their camps not only with their wives and children but other workers as well. Survival on industry rates meant working long hours while the weather was favourable.

In the 1900s, cutters earnt nine pence per sleeper. To earn the basic wage of £2/2/-, they had to consistently produce 56 sleepers a week. While a good cutter could turn out between 72 and 96 sleepers in a six day working week, giving a gross of between £2/14/- and £3/12/-, cartage and royalties had to be deducted, and bad weather, injury or an inability to work could reduce this figure substantially.

Once cut, finished sleepers were carted to one of the shipping points around Twofold Bay and over the years many of the district’s waterways became invaluable for the transportation of sleepers, boats and ships hauling hundreds of thousands of out from the main wharf area at Snug Cove as well as at Quarantine Bay, Fisheries Beach, East Boyd and Kiah Inlet.

It was easy to tell when a sleeper ship was expected. Large stacks of the squared timber were unloaded at dumps around the Lookout and other shipping points where they were inspected by a purchasing agent or their representative during what was known as “the pass”. During this scrutiny, the sleepers were either passed or rejected (“blued”) and although blued examples could still be sold, they would fetch only around half the price of a passed sleeper. Cutters often also secured extra work at this time, turning sleepers for inspection, as well as loading the ships, driving the winches, unhooking slings and moving sleepers into position on board the vessels.

Growing worldwide demand pushed the industry to its peak locally in the late 1940s to mid-1950s. By this time, however, it was becoming increasingly mechanised with trucks supplanting horse and bullock teams and swing saws overtaking the traditional hand tools. The industry faded out around the Eden district around 1955 and eventually timber sleepers were replaced with concrete alternatives. 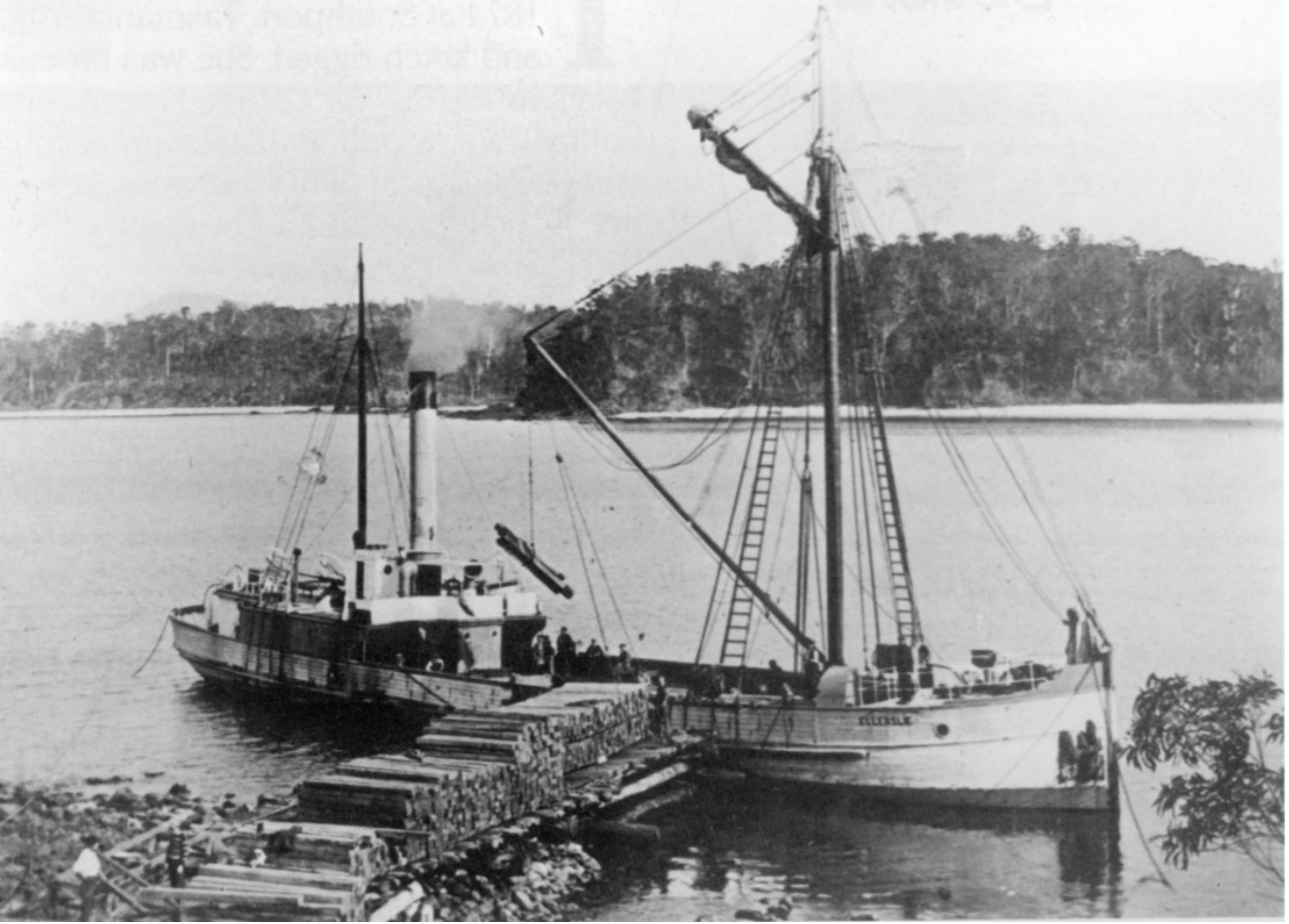 Above: Ellerslie loading sleepers at Quarantine Bay, C. 1906. From the George Family Collection. 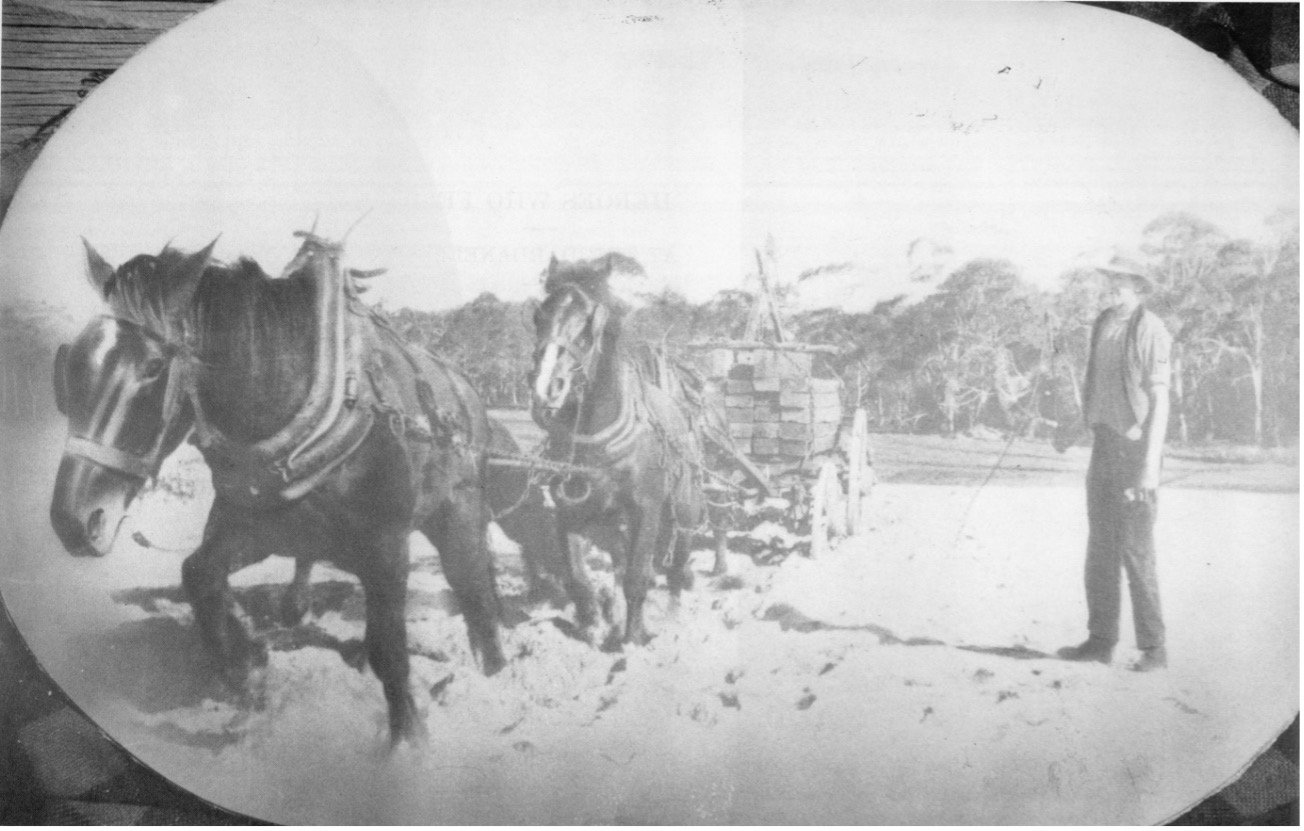 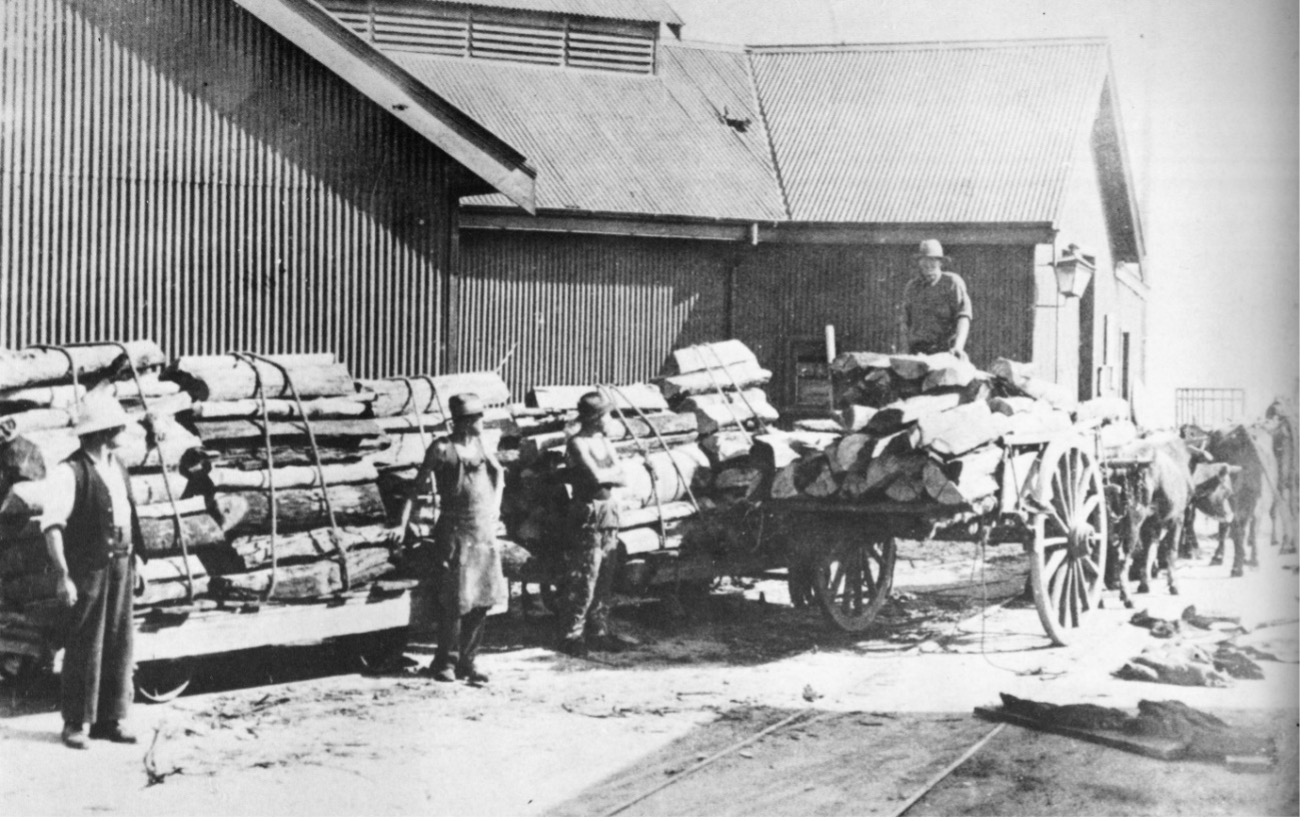 Above left: Baden (Paddy) Egan with load of sleepers on Fisheries Beach. With no jetty at the site, sleepers had to be winched out and loaded on to the steamer. From ‘Eden Revisited’, by Rene Davidson.

Above right: Baralga loading sleepers at Eden wharf for India, May 1959. From ‘Eden Revisited’, by Rene Davidson.