Low population levels in the region continued to create problems for landholders, business people and residents, with many proclaiming the potential that immigration represented in easing the shortage of labourers. Yet despite the widespread issue, Twofold Bay was unusual in that it was one of the few places outside major metropolitan areas that received immigrant ships direct from other nations.

The first of these, the 507-ton wooden barque Bermondsey, departed Plymouth on 8 September 1849, with 182 immigrants on board, including 36 families, 26 single females and 43 single males. In November, the Colonial Land and Emigration Commissioners announced its anticipated arrival in Twofold Bay, extending an invitation to settlers on the Monaro to make arrangements for hiring the new arrivals.

After a voyage of about three months, the vessel landed in Twofold Bay on 7 December 1849 with all on board in good health. For three days officers from the immigration board, stationed at Twofold Bay, examined the passengers, most of whom were destined to disembark at the local port. The remainder continued on to Sydney.

Edward Leyton of Leyton and Co., who had the official contract for housing and provisioning the Bermondsey immigrants after their arrival in Twofold Bay, also had the leasehold over the Boyd Town buildings and it was here that the men, women and children were initially accommodated.

Among the passengers, farming, trade and service occupations were predominant, including farm labourers, gardeners, shepherds, grooms, ploughmen, stock keepers, sawyers, carpenters, blacksmiths, wheelwrights, cabinet makers, farriers, bakers, butchers, brick makers, domestic servants, house servants, nurse maids, and dairy maids. With this skill set it wasn’t surprising that the majority found positions in the area – including 26 in Eden, another 20 at Boyd Town, 21 in nearby Pambula, five in Bega, five at Bombala, two in and around Cathcart and another 24 on the Monaro. The names of some of those who landed on the Bermondsey, including Alexander, Cochran, Hamilton, Hall, Hart, Lucas, Moffitt, Newlyn and Stewart still remain in the district today.

1855 saw a new influx of immigrant arrivals to the region, this time from Germany onboard the Caesar. The measure was initiated by the Twofold Bay Pastoral Association, an influential group of businessmen who, like so many others in the region, were experiencing chronic problems due to labour shortages. In response, James Manning, local manager for the Association, arranged for German workers skilled in farming, winemaking, fruit growing and stone masonry to be brought directly to the district.

On 15 November 1854, the 498-ton barque Caesar departed Hamburg, bound for Twofold Bay and Sydney. On board were 293 assisted immigrants along with the Captain and a crew of 13. Quoting from the diary of William Gotz, one of the passengers, “…we had on board…far too many for the size of the ship…”

Not surprisingly then, just eleven days into the journey, cholera broke out and although there was a doctor, Ernest Middendorf, on board, he was powerless to halt the epidemic on the overcrowded ship. Few of the seventy families on board escaped untouched by the high death toll – in all, 66 of the men, women and children died from the disease, with burials at sea an all too common occurrence.

After enduring a journey of some four months, the Caesar finally arrived at Twofold Bay in March 1855, the second of the two immigrant ships known to have sailed direct to the port. Despite the sense of relief that would undoubtedly have been felt, the cholera outbreak meant that ship was quarantined for eight days, having to fly the yellow flag and distance itself from the settlement.

After moving away from the harbour, the passengers were allowed to go ashore, so long as they remained one English mile from the town. During this time, Dr. Middendorf described the health benefits of the bay’s rich bounty of sea food, noting that “…I discovered some oysters and brought a few to the Captain… the fishing was extraordinarily productive and delivered some exemplary kinds. Between the rocks on the beach there were lobsters and crabs, and in addition we later found great banks of oysters of a particular type that was finer by far than the English natives…On one expedition the Captain and I gobbled about 300 of them. The whole world ate oysters, down to the smallest child; I gave an appetite back the convalescents with oysters.” The spot that the Caesar anchored at became known as Quarantine Bay, the name that it is still called today.

Of the original 77 passengers who were to disembark at Twofold Bay, only around 63 survived the journey to finally step foot ashore. They were met by a representative from the large Kameruka Estate and from Eden, journeyed overland on foot. The remainder continued on to Sydney where, after landing, a number boarded steamers to make the return trip down the coast to Twofold Bay after being hired to work on the Monaro.

More than 160 years on, the names of some of these German families – including Ubrihein, Rheinberger, Schaffer, Boller, Holzhauser and Umbach – remain present throughout the district today. 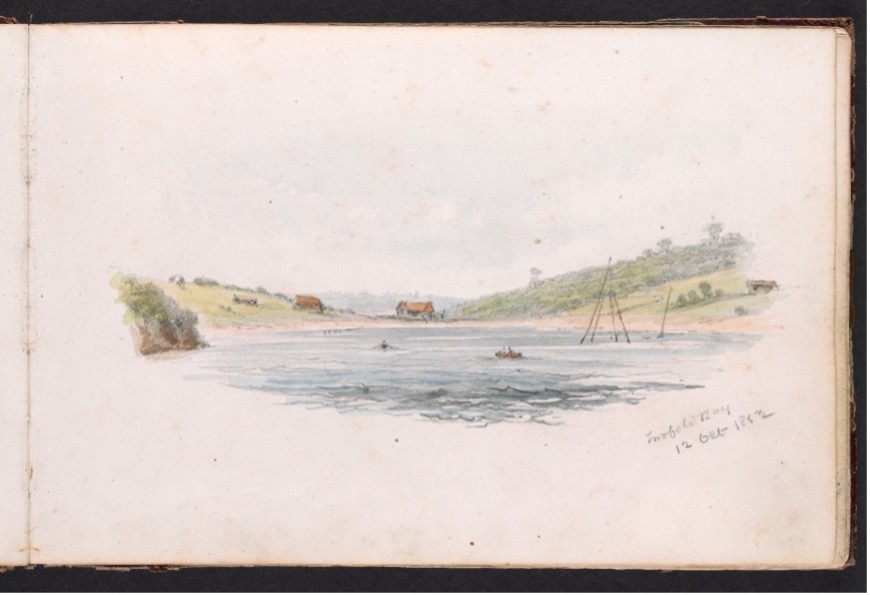 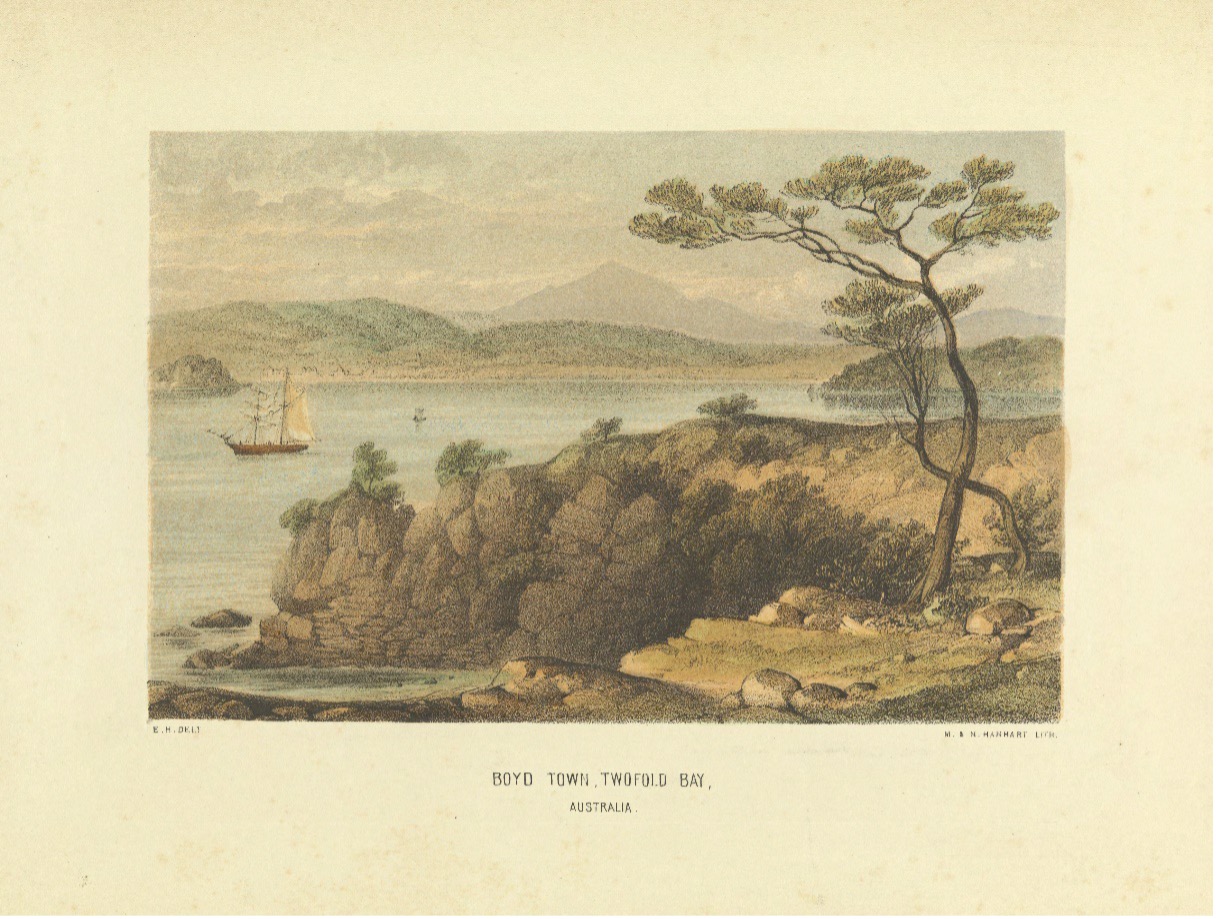 Above left: ‘Twofold Bay’, 12 Oct. 1852, by Eliezer Levi Montefiore, in Sketches made during visits to Adelaide Melbourne & Sydney 1852 to 1853. The bay would have appeared very similar when the Bermondsey arrived. From the collection of the State Library of Victoria.

Above right: ‘Boyd Town, Twofold Bay, Australia’, lithograph by Elizabeth Hudspeth and M. and N.
Hanhart, C. 1855. The bay would have appeared very similar to this when the Caesar arrived. From the collection of Libraries Tasmania.