Like others before him, Scottish entrepreneur Benjamin Boyd was tempted by the potential of the new Australian colonies and in December 1841, he sailed from Plymouth, England, on board his luxury schooner Wanderer with grand plans of a maritime, business and agricultural empire.

Also, on board was his brother James as well as distinguished young marine artist Oswald Brierly, the party sailing into Sydney Harbour in July 1842 to cheering crowds. The New South Wales that they arrived to was in the throes of a devastating financial depression with bankruptcies rife and livestock available at rock bottom prices. With funds from the Royal Bank of Australia at his disposal, Boyd moved quickly to capitalise on the situation, buying up agricultural and pastoral interests and the livestock to populate them with. By the end of 1844, he was one of the largest landholders and graziers in the colony, controlling more than 1,750,000 acres of pastoral land between the Murray and Murrumbidgee Rivers, as well another 500,000 acres on the Monaro and adjacent areas. At the same time, he was also establishing shipping and whaling fleets and business undertakings as an adjunct to this.

Boyd got his first glimpse of Twofold Bay while travelling along the east coast in December 1842 and when his steamer Seahorse was forced to return to Sydney for repairs, he and his party remained on the Wanderer to explore the harbour. Recognising its value as a deep sea port for his shipping line, its potential as link between his ocean and land based activities, and its convenient location for coastal and trans-Tasman trade, Boyd set about planning a grand settlement at Twofold Bay as the lynch pin of his growing commercial, maritime and pastoral empire.

Boyd purchased 640 acres on the southern shores of the bay at the district’s first land sales in March 1843. There he immediately began developing Boyd Town, embarking on an ambitious building program and within a year, operations at his self-named settlement were well under way. Among the facilities either planned or already in progress were a commodious hotel, a church, dwellings and workmen’s cottages, a doctor’s residence, commercial stores, warehouses, a wool store, salting works, boiling down works to render sheep and cattle into tallow, trying out works for his shore based and deep sea whaling enterprises, wells for fresh water and a 300-foot jetty and lighthouses to cater for his maritime enterprises.

The imposing Seahorse Inn, designed as a pivotal part of the seaport settlement, was commenced within a year of Boyd’s arrival in the colony, the first hotel in the area now encompassed by the Bega Valley Shire. Reportedly constructed from a sketch plan drawn by Boyd himself, it took its name from Boyd’s paddle steamer.

With a fleet of vessels at his disposal, Boyd had commenced coastal shipping operations by December 1843 to cater for the colonial markets and the same year, appointed Brierly manager of his whaling enterprises, in charge of nine deep sea whalers operating out of Sydney’s Mosman Bay as well as thirty shore-based boats stationed at Twofold Bay.

Boyd is considered Australia’s first ‘blackbirder’, a term used to describe the practice of kidnapping or tricking Pacific Islanders on board ships to be used as slave labour in Australia. These people were paid minimal wages for their forced labour as to evade anti-slavery laws. South Sea Islanders were brought to the Eden region in the 1840s to work on Boyd’s pastoral and whaling operations, where he was already using Aboriginal and Maori labour.

Being heavily interested in maritime concerns and with shipping playing such a central role in his Twofold Bay activities, it is unsurprising that Benjamin Boyd turned his attention to the construction of navigation aids to safely guide his vessels into the harbour. After first having his Wanderer’s Tower erected on Torargo Point in 1843, he then turned his attention to a more imposing structure.

Construction of the twenty-three metre (76 foot) tower began in 1845 with stonemason John Helmrich overseeing the monumental project. Although reportedly designed by Boyd’s whaling manager Oswald Brierly, it may have been a standard design known to Helmrich, himself having experience in the construction of a number of Scottish lighthouses prior to his arrival in Australia.

Situated on the extremity of South Head (or Red Point), the inscription of Boyd’s name in bold letters at the top and the care taken over its construction indicates that it was meant to stand as much a landmark and a symbol of power at the gateway of Boyd’s empire as a guiding light. Built of sandstone quarried at Pyrmont in Sydney and transported to the area on Boyd’s coastal steamships, the massive blocks were carted from the wharf at Boydtown to the South Head site by bullock teams. A rail track was reputedly laid to haul the 3-foot by 2-foot blocks of around a ton each, sections of which were apparently still visible at the beginning of the 20th century.

Visually divided into five sections by windows down the four sides, the name “BOYD” was chiselled into the stone of the tower’s parapet. Inside, a series of wooden platforms with connecting ladders gave access to the top of the tower. Henry Kemble commented in 1847 that it had occupied nearly three years in building and was “…a credit…” to Mr. Helmrich, and Brierly wrote to Boyd the same year to reassure him that the original plans were being adhered to.

While on an official visit to Twofold Bay during his coastal survey for the British Government in September 1847, Captain Owen Stanley inspected the lighthouse, finding it complete as far as the external walls and parapet were concerned. However, as a privately owned facility, it had not been officially sanctioned and the government refused permission for its operation. Although Brierly suggested that Boyd might give it to the government, Stanley instead recommended Gabo Island and work began preparing that site in the late 1840s. Despite this refusal, Boyd instructed Brierly to light the tower and on 21 October 1847 Brierly noted “…lighthouse lit for the first time…” He repeated the effort the following night.

Like so many of Boyd’s undertakings, work on the lighthouse ground to a halt towards the end of 1847, the structure still incomplete and by 1848 it was being used as a lookout by whaling crews.

Perhaps the most extravagant in scale and expenditure of the many projects inaugurated during Boyd’s brief colonial venture, Brierly estimated that the project had cost his employer more than £2,000, though Boyd himself had little idea of the amount involved.

The tower and the land upon which it stood was again offered to the colonial government in September 1860, but officials considered the cost prohibitive and instead recommended construction of a lighthouse on the Lookout in Eden. The monolith still stands on South Head today, a reminder of Benjamin Boyd’s brief and stunningly disastrous speculation into 19th century New South Wales industry and trade.

Collapse of an empire

In April 1847, Boyd engaged William Moutry as superintendent of the various works at Twofold Bay, but by this time, his empire was already teetering on the edge of collapse. That year, his cousin William Sprott Boyd replaced him as the Royal Bank of Australia’s colonial representative and in 1848 Brierly departed, accepting Captain Owen Stanley’s invitation to join a survey expedition on board H. M. S. Rattlesnake.

Most of Boyd’s Twofold Bay activities ceased during 1849, the majority of the works still incomplete. That year, he slipped quietly out of Sydney Harbour on board the Wanderer, bound for the Californian goldfields. During his brief but frenetic seven-year foray into colonial life, he left an indelible but not necessarily positive mark on virtually all aspects of New South Wales

In 1851 he disappeared without a trace, reportedly killed while visiting the Solomon Islands. So complicated and confused were the accounts associated with Boyd’s many undertakings, it was not until 1856 that the estate of the Royal Bank was finally placed up for auction. 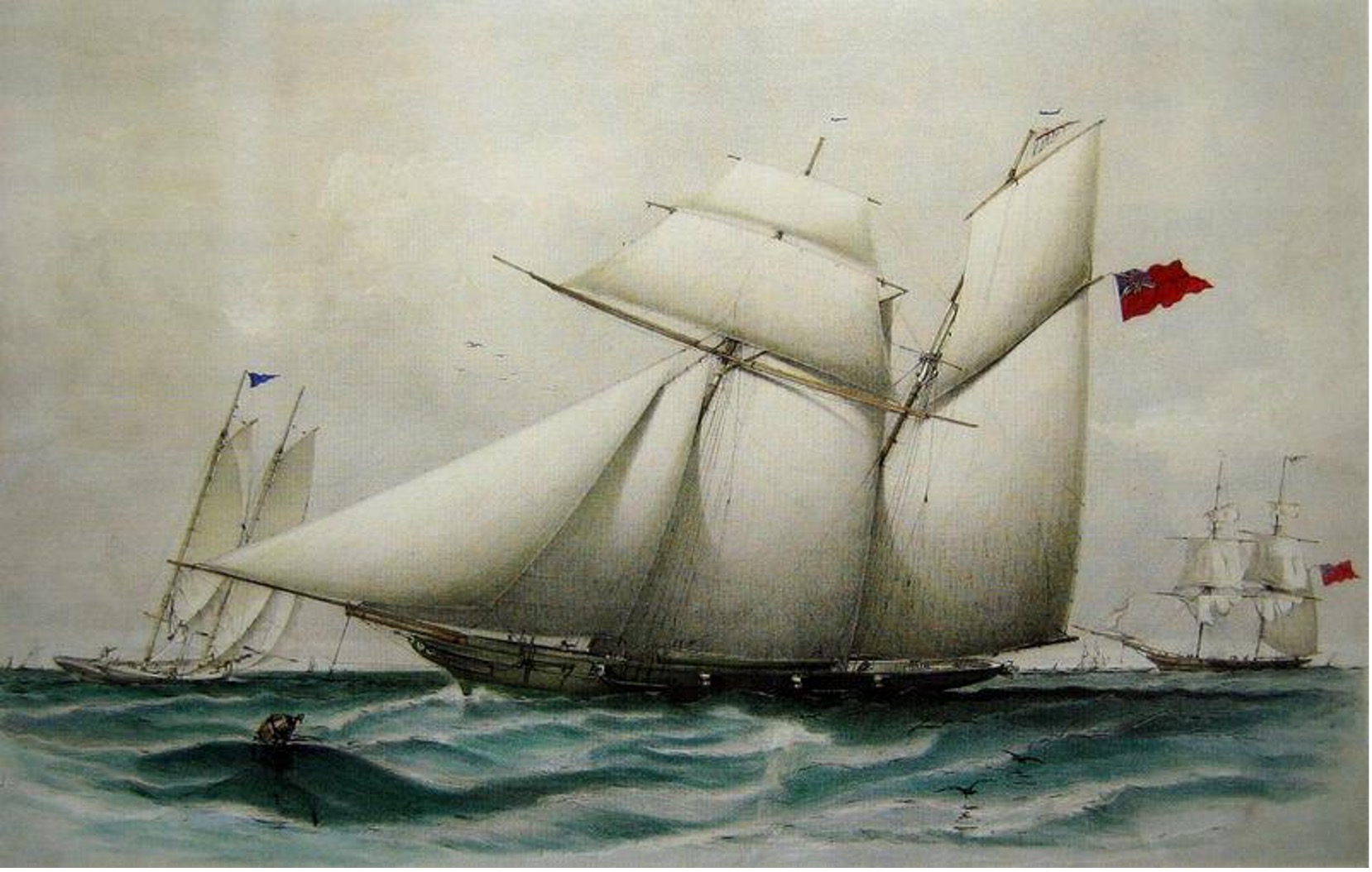 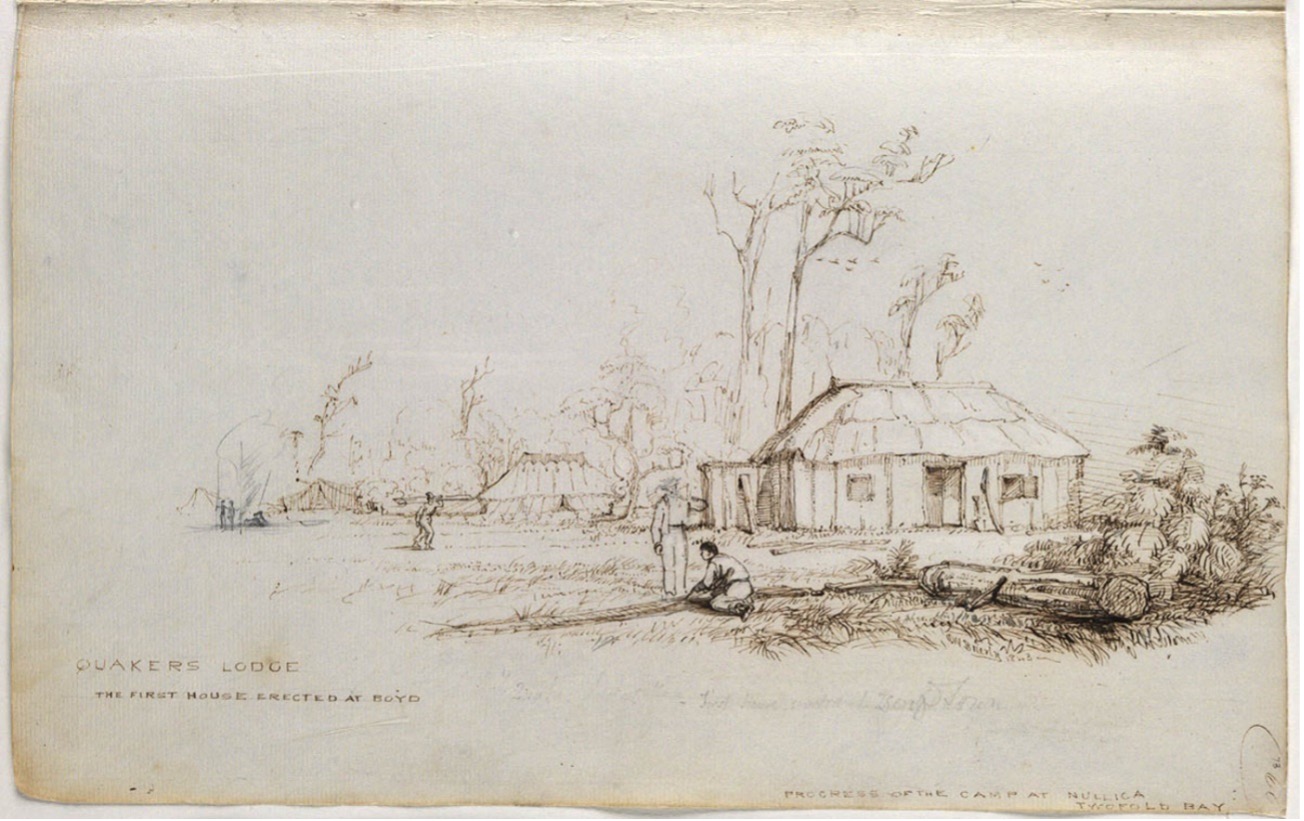 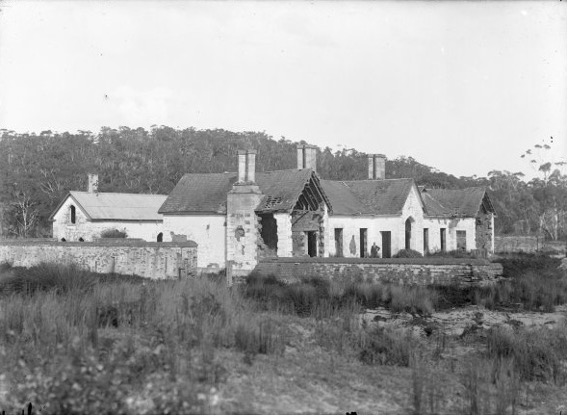 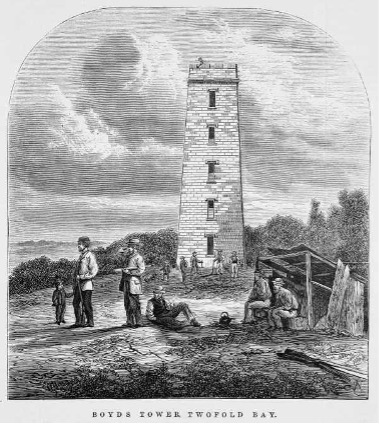 Above left: ‘Quaker’s Lodge, the first house erected at Boyd. Progress of the camp at Nullica, Twofold Bay’, pencil sketch by Oswald W. Brierly, in his Journal of a Visit to Twofold Bay, Maneroo, and Districts Beyond the Snowy River, December 1842 to January 1843. From the collection of the State Library of NSW.

Above centre: ‘Boydtown. Ruins of Ben Boyd’s house.’ C. 1932, photograph by Harold Cazneaux. From the collection of the State Library of NSW.